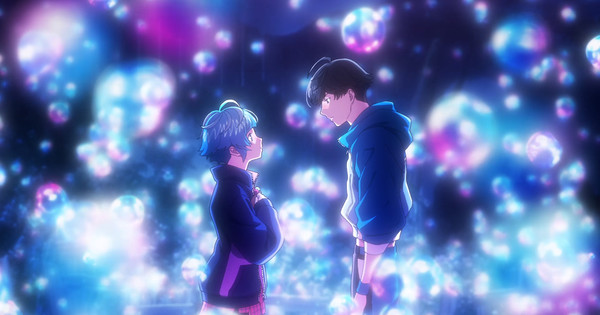 Let’s get something out of the way first. Those who jumped on this movie on its staff pedigree alone are going to be disappointed. This is a Gen Urobuchi project in the same way as Gargantia on the Verdurous Planet or Aldnoah.Zero. While there’s no doubt that Urobuchi had a hand in the film’s creation – at the very least he offered opinions and feedback on the sci-fi elements – he’s not the sole screenwriter on the project like much of the promotional coverage might lead you to believe.

There are three screenwriters on Bubble, most notably Gravity Rush‘s Naoko Satō, and this movie feels like it has more in common with her work than anything Urobuchi has created. You aren’t going to find anything dark, emotionally or artistically, much less thematically provocative in Bubble. It’s a film with a myriad of fantasy and sci-fi concepts but fails to rise above them to create truly compelling character relationships, a death knell for what is at its core supposed to be a romance.

The central couple is Hibiki, the detached parkour ace for the Blue Blazes team, and Uta, a “mermaid.” She’s not truly the fantastical creature, but Bubble draws heavily from Hans Christian Andersen‘s original story and its more tragic conclusion. Familiarity with the original fairy tale serves as a stand-in for Uta’s characterization and the groundwork for her romance with Hibiki, but the pair never truly “click” in a meaningful way. Uta is shown as practically feral, only gaining human speech after spending many evenings reading books on board the Blaze Blue’s boat. Her character can be simmered down to an infectious sense of wonder and an adeptness for parkour, but Uta lacks any real sense of self needed to make her a compelling character.

Hibiki fares somewhat better. The staff balanced his status as a parkour prodigy with a surprisingly well-understood depiction of auditory processing disorder. The movie comes closest to emotional sincerity when Hibiki tells Uta about his childhood and growing up with his disorder and its inclusion is mirrored somewhat when Uta finds that she cannot touch other people. Their conditions offered opportunities for the film to explore how they have to navigate relationships and environments, but the story fails to utilize them to their full potential. We get some sense that Hibiki is comfortable living in this former city environment because he no longer has to block out trucks, traffic, and mobs of people, but it doesn’t inform his character enough to feel as meaningful as it could.

If Hibiki and Uta seem like slivers of characters, the supporting cast fares even worse, a possible consequence of editing and time constraints in what is already a two-hour movie. The team leader of Hibiki’s parkour group, KAI, appears to have suffered the most in this area. Throughout the entire film he harbors an inexplicable sense of jealousy revolving around Hibiki that is never really elaborated on. It doesn’t seem to be caused by his teammate’s parkour abilities; instead, he seems jealous when others dote any kind of attention on Hibiki. It feels vaguely romantic but there’s no rhyme or reason given to it. Similarly, we never get a sense why Shin and Makoto, the two adults monitoring these Lost Boys, are involved with them at all. Makoto appears to be a scientist monitoring the various phenomena going on in the area and Shin is a former parkour player, but why they’ve found themselves caring for these kids specifically, and why the kids even listen to them, is left to our imagination.

Visually, Bubble is a tough act to beat. Those who missed director Tetsuro Araki‘s influence in Attack on Titan‘s action scenes will find similar thrills throughout the movie in the form of “battlekour,” the parkour-meets-capture-the-flag sport played to win resources from opposing teams. The matches expertly utilize a smooth, 3D camera to put the viewer in the players’ shoes. Often the high-flying stunts will be shown from a first-person perspective, letting viewers leap and roll from the roofs of skyscrapers to gravity-defying debris. The result will leave you holding your breath and it’s easy to see how this specific concept made for an enticing film premise. I only wish Bubble had decided to go all-in as an action film and built its central concept around wayward parkour gangs. If The Undertakers team were elevated to actual antagonists, the film could have found its footing in presenting a compelling conflict.

Beyond its thinly-realized characters, Bubble lacks a genuine conflict for most of its runtime. Hopping between fleshing out its sci-fi concept, parkour, and Uta’s inevitable return to the sea, the movie is unable to settle on any of them long enough to build sufficient tension. The final act gives viewers some semblance of an explanation about what turned Tokyo upside down and reinforces its connection to The Little Mermaid but it’s too little, too late. There’s plenty of visually beautiful moments, both quiet and exciting, but Bubble‘s failure to connect is rooted in trying to be too many things at once and never quite exceling at any of them.