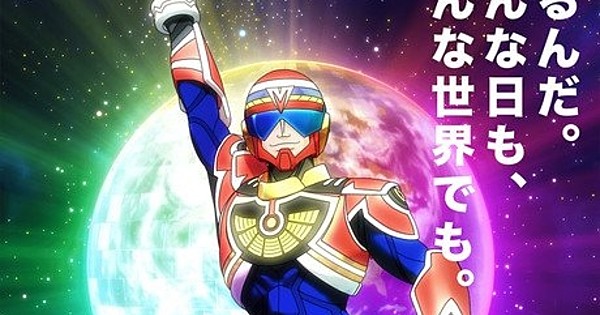 If you haven’t seen a single episode of Muteking the Dancing Hero, you may think I’m making it up, or that I’m imposing Western values onto the show when I say that it’s about how technocrats have gentrified San Francisco. You may think there’s no way a remake of a cheesy 1980s tokusatsu anime is specifically about an issue occurring in a specific American city, or that there’s some kind of allegory I’m missing, or that they’re just telling a story they think is fun with no message. However, watch an episode or two and it becomes abundantly transparent that there is no subtlety to the clear and direct parallels between the show’s story and what is happening in real life.

It’s not unprecedented either; Muteking is one of a long line of Tatsunoko reimaginings that tackles matters of social injustice, the most famous example being Gatchaman Crowds and its sequel Insight. It telegraphs its intent clearly from the very start, when Muteki arrives in Neo San Francisco. He tries to stop for food at a fast food joint painted and decorated all in black, a sharp contrast to the colorful cityscape around him. On his way to his grandmother’s, he catches a public broadcast by Seo, the Steve Jobs-esque CEO of the tech company OctInq – an obvious analog to Apple – announcing their new portable music device and encouraging everyone to throw away their Walkmans and boomboxes. Throughout the show, Seo introduces a number of tech-driven schemes spoofing on trends like wellness retreats and gimmicky restaurants, all designed to melt the people of Neo-San Francisco into a literal blob of complacency, furthering OctInq’s nefarious ends. Muteki transforms into Muteking via his boombox-wielding friend DJ’s DJing, roller skates around while singing, and in the end defeats the blob and returns the people back to normal.

The first four episodes follow a fairly simple structure, with Muteki transforming toward the end of the last half of each episode, doing his song and dance as Muteking, and defeating the villain without much effort. This adherence to formula in the latter half of the episodes – and the ease with which Muteking wins – leave Muteki free to explore the vibrancy of Neo San Francisco, meet new people, and grow as a person. He develops a crush on Aida, the waitress at a local diner, and befriends a group of siblings who hang out at a run-down arcade, and its proprietress Vivi.

The setting seems to have been designed by someone with a great love of and nostalgia for San Francisco before the tech companies moved in. The areas where OctInq have yet to take hold are awash in bright colors, populated by artists and folks in alternative dress, many of whom are visibly and unabashedly queer and gender non-conforming. The dismal black-and-gray color scheme of OctInq is a direct criticism of the “sleek minimalism” aesthetic pushed by tech companies, and may even be inspired by “gentrifier gray,” a cool gray tone popular with property owners in San Francisco for painting over units in once-colorful neighborhoods. Much like in reality, once-thriving neighborhoods like the one where Vivi’s arcade resides have become empty and depressing. It is, perhaps, an over-romanticization of San Francisco’s past, when the city has always been rife with issues, but it is earnest and endearing to see nonetheless.

As one would expect from a series with the word “dancing” in the title, music plays a huge role in the series. The opening and ending are both certifiable bops with great visuals to go along with them; the former in particular tends to get stuck in my head for days, but to be honest I rarely ever mind; it’s just that good. The diegetic music is strong as well, with a variety of genres ranging from the old-school tokusatsu charm of Muteking’s theme song to the electronica of the EDM singer Aurora. At least I think it’s EDM; I know nothing about electronic music outside of synthpop and keytars… It does sometimes feel judgmental about what the story considers good, creative music versus engineered, corporate music, but that’s a relatively minor quibble.

By now, you may be wondering if there’s anything to be gotten out of the show if you don’t care about gentrification, the looming technocracy, or San Francisco. My answer is, of course, “Yes, but also you should care.” The storytelling and character development are snappy and fast-paced, always ready to surprise you the moment you suspect it’s falling into formula. Transforming into Muteking is a, well, transformative experience for Muteki as he comes to embrace his role as the dancing hero, and watching his relationships with the people around him is always fun. His romance subplot with Aida is less compelling and, to be honest, comes across as half-hearted compared to his bonds with DJ, Vivi, and the four siblings.

The story divides up neatly into three acts, and the final act is where it gets into trouble. The problem with telling a story that’s an allegory for an ongoing social problem is eventually you have to resolve the conflict and create a satisfying conclusion. Gentrification by the technocracy and the homogenization of culture do not have tidy answers, or at least not ones that are fun to depict onscreen. Instead, the story descends into pure spectacle, embracing tokusatsu tropes left and right without regard for coherence or thematic consistency. This wouldn’t be so bad, but a lot of the twists at that point feel random, contrived, or cliché as the story builds to its climax. By the end, the threat may be eliminated, but a lot of emotional loose ends never get fully tied up.

In light of that mess of an ending, it’s hard to say whether or not I’d fully recommend Muteking the Dancing Hero. It’s certainly a fun show, but what’s more, its themes may hit hard depending on your life experiences. While I’m not from San Francisco, I live in a city that has undergone a lot of gentrification due to tech companies over the last decade. I’ve watched the gay clubs and watering holes in the historic LGBT neighborhood be replaced with wine bars and upscale apartment buildings as the area becomes less safe for people to be who they are. Almost every house on my block is being knocked down and replaced with identical glossy, expensive townhouses. Muteking recognizes the damage that does to a city, but just doesn’t know what to do with it.