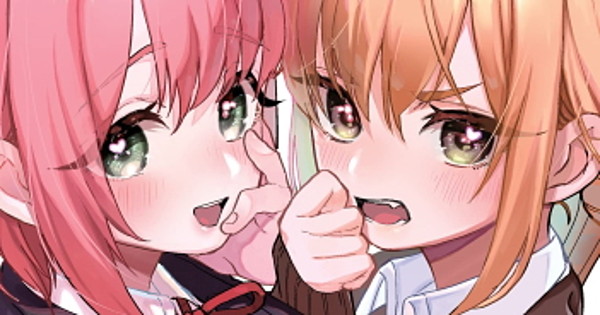 Now I know what you’re probably thinking, just from looking at that title. 100? Really? That’s obviously some hyperbolic number meant to pull you in, right? There’s no way any series could actually introduce a hundred different girls and still function! And I get it. You’re a savvy consumer. You know big numbers like that are only ever there for a marketing pitch. It’s not like Yamada from B-Gata H-Kei ever slept with 100 guys in high school. If you’re my age you’re probably still haunted by the broken promise of 100 Good Deeds for Eddie McDowd. We all know how this works.

The thing is, you’re thinking about this premise with logic, and logic has no home in this manga. The 100 Girlfriends Who Really, Really, Really, Really, Really Love You runs off of pure, lovestruck insanity. I firmly believe the authors have read every single harem manga ever written, and in the process allowed a fungus to spawn inside their brains, eventually devouring their gray matter entirely and leaving a large, heart-shaped mushroom that can recite every line of To-Love-Ru by heart. On the surface, its premise might sound similar to other self-aware harem series like The World God Only Knows, but those stories still had their sanity. In this world, sanity left to buy cigarettes 10 years ago and never came home. So while Rentaro may “only” be up to three official girlfriends by the end of this first volume, I wholeheartedly believe this series intends to hit its titular goal some day, without caveat.

All that is to say that this series is goofy as all hell. It’s not trying to tell anything resembling a serious love story, and it wants to make that apparent immediately. The reason Rentaro is destined to have a hundred girlfriends is because the God of Love got distracted watching Laputa: Castle in the Sky, and accidentally put a couple extra zeroes in his Divine Spreadsheet. Shizuka, aka Girlfriend Numero Tres, is so shy she can’t speak, but instead of writing out her thoughts she has fully memorized her favorite fantasy novel, and flips through pages to point at different lines in order to communicate. When Rentaro realizes he only has a single “first kiss” to split between two girlfriends, he devises a Danganronpa-level double-blind scenario with sensory deprivation and random numbers to create Schrodinger’s First Kiss. This is a farce, it knows it, and if you can get on that wavelength it becomes a ton of fun.

This is very much a comedy of escalation, taking any given harem manga trope – the bashful girl with big boobs, the standoffish tsundere, the hapless lead who nonetheless attracts women like a fly catcher – and cranking up their inherent absurdity until they shoot the moon and becoming endearing through sheer intensity. Rentaro isn’t just a nice guy; he’s the nicest guy ever, willing to pull a week of all-nighters just to transcribe Shizuka’s book into a text file so she can use it with her phone’s text-to-speech function. In a bonus chapter, it’s revealed he’s been making doomed confessions since he learned to talk, and getting dumped from the literal crib. It’s not strictly a parody of harem conventions, but it’s deeply familiar with them and very happy to drive full force to their (il)logical extremes. It’s funny enough in its own right, but gets extra hilarious if you’re familiar with harem comedies and recognize just how off the ranch the series takes these familiar ideas.

The characters, while broad and simple, also do great in managing all that energy. While basically everyone with a speaking role is some kind of dumbass, they’re all their own distinct flavor of stupid, bringing strange ideas and perspectives to each chapter while still being able to play straightman to any other character’s brand of idiocy. That’s an important factor with a constantly expanding cast that promises to climb into the triple digits by the time it ends, and gives hope for 100 Girlfriends to have some longevity beyond this first volume. It also helps that they’re all written to genuinely love each other. In a story about 100-timing, Rentaro could easily come off as a crass jerk collecting girls like trading cards, but he’s such an over-the-top sap that you firmly believe he loves all his soulmates equally and without exception. The girls themselves take a while to warm up to the idea of polyamory, but by the end of the volume they’ve all come to like and accept one another. This isn’t what I’d call a wholesome series, but in its absurdity it has little patience to spare for meanspirited cynicism.

Yukiko Nozawa‘s art also helps a lot in that department. Each of our (so far) four main characters has a distinct look and visual personality, which is critical in juggling so many characters with identical motivations. More importantly, the characters are wildly expressive, able to contort their faces into both cute and grotesque visages depending on what the joke calls for, and it sells the comedy perfectly. Their background in porn is also readily apparent, as this is still a Ghost Ship release. While it’s not as blatantly raunchy as fellow Jump+ title 2.5 Dimensional Seduction, all three of Rentaro’s girlfriends are hot for his harem protag bod, and are down to clown in the very near future. There’s a LOT of heart-shaped pupils in this book, if you know what I mean. But that all ultimately gels with the humor and energy of the rest of the jokes, and since everyone here is very obviously enjoying themselves, I can’t complain. Just maybe don’t read this in polite company.

100 Girlfriends is a premise that, by any metric, should not work. But through a sharp sense of humor, writing that 1000% commits to the bit, and excellent art, it doesn’t just work: it excels. If you’re a fan of more typical romcoms, you’re likely to get a kick out of it, but even if you hate harem series, it may just manage worm its way into your heart through confidence alone.