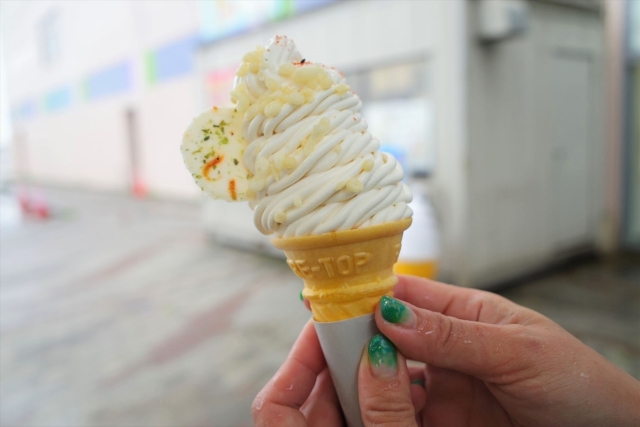 A surprising find to thrill the taste buds of noodle lovers.

There are a lot of places where you can buy noodles in Japan, but when you’re on the highway and don’t have a lot of time to stop and eat, you might be able to find a hot udon and soba vending machine to help you out.

These retro vending machines, which have “udon” and “soba” written across them in Japanese, were once popular in the ’60s, when they were set up with other food-dispensing vending machines in clusters known as “auto restaurants“.

However, when the first convenience store appeared in Japan at the end of the ’60s, demand for these auto restaurants waned, and the noodle vending machines gradually disappeared with them. Thankfully, some of these retro machines still exist, although they’re now found mostly at highway rest areas and tourist spots.

One of these noodle machines is still operating at the Michi no Eki (“Roadside Station”) at Akitako Port Tower Selion in Akita Prefecture, where visitors can not only get a taste of old-school noodles served hot from the machine, but enjoy it as a soft-serve ice cream as well.

The ice cream can be purchased either on its own for 380 yen (US$2.94) or with toppings for 430 yen. Looking at the sign, the toppings are said to include Shichimi (“seven-flavour” spice mix), ebisen (a prawn senbei rice cracker) and tenkasu (deep-fried tempura crumbs), so our reporter Haruka Takagi, who was there for the taste-testing, immediately opted for the soft serve with toppings.

The friendly vendor wasted no time in bringing the weird creation to life, rolling her sleeves right up to get a good swirl on the ice cream, before sprinkling it with crunchy tenkasu balls.

She then wedged a prawn rice cracker into the soft serve and handed it over with a smile, instructing Haruka to sprinkle as much or as little of the spicy Shichimi seasoning on top to finish.

Shichimi, which is often sprinkled on noodle dishes, can be quite hot on the taste buds, so Haruka used it sparingly.

Ta daaa! The Udon Soba Vending Machine Noodle Broth Flavour Soft Serve was a mouthful of a name, but would it deliver a mouthful of flavour?

It certainly looked fantastic with its unusual toppings, which are usually served with noodles rather than ice cream, and this cute sleeve was a lovely reminder of the retro vending machine involved in its creation.

As Haruka snapped photos of the ice cream from different angles, it began to melt quickly, despite it being a cool and rainy day with a temperature of around 13 degrees Celsius (55.4 degrees Fahrenheit).

It was melting a lot faster than the usual vanilla-flavoured soft serves Haruka usually enjoys from time to time, which made her wonder how quickly this would melt on a hot summer’s day.

With no time to spare, Haruka slid the soft serve into her mouth and felt the creamy delicacy melt away on her tongue. It was surprisingly sweet…and utterly delicious! While she was anticipating a salty, soy-sauce flavour, it delivered a tantalising hit of soup stock instead, with the taste of dried bonito shining through.

It was a surprisingly good partner for the creaminess of the soft serve, and the toppings worked incredibly well to fool her mind into thinking she was actually eating a bowl of noodles…in sweet dessert form.

It actually got her so in the mood for a bowl of vending machine noodles that she made her way over to the machine to buy them, only to discover…

▼ …the machine had sold out of noodles for the day.

▼ All was no lost, though, as the roadside station sold take-out udon packs for 270 yen.

While she may not have been able to enjoy the novelty of eating noodles hot from the machine, like Mr Sato and our boss Yoshio did a few years back, she would still be able to at least get a taste of them. And judging by what was available in the shop, there was a heap of related merchandise on offer too, with the vending machine logo adorning T-shirts, tote bags, towels, notepads and magnets.

Haruka resisted the urge to splurge, settling on a T-shirt and a humble bowl of udon, which she took home with her for a taste test. Once home, she found there were four items inside her udon pack, and three of those were featured in the soft serve she’d eaten earlier that day — there was a disc of prawn tempura, some soup broth, and a small sachet of shichimi.

With no vending machine to do the cooking for her, Haruka added boiling water to the noodles to help loosen them, before discarding the hot water, in line with the instructions printed on the package.

Then she added the soup broth and poured boiling water over it all, using just the right amount of water to adjust the soup strength to her liking.

▼ After adding the toppings, the meal was ready to eat!

The first thing Haruka did was bite into the crunchy disc of prawn tempura. The broth had helped to heat it up nicely while imbuing it with some extra flavour, making it taste surprisingly good — not like something you’d expect to eat from a vending machine at all!

She now had little balls of tempura floating in her soup, just like the tenkasu topping she’d enjoyed with her ice cream. The broth was reminiscent of the soft serve as well, making Haruka realise just how well they’d managed to capture the flavour of these noodles in the ice cream.

The udon had a fantastic texture, and as Haruka slurped up the very last of them in her bowl, she was glad she’d finally tried them, and bought the T-shirt to boot.

▼ Been there, done that, bought the T-shirt.

Haruka is now an ardent fan of the Udon Soba Vending Machine and highly recommends you give it a try if you’re ever lucky enough to see one. Nothing quite beats the nostalgic charm of a retro vending machine, especially when they’re fast disappearing from the landscape, so it’s nice to see them live on and bring joy to new generations too!